Institutions of the U.S. Department of Transportation has been given permission to the flying car, the car was named Terrafuga Transition to be tested on public roads.

Transition is described more biased toward small plane with two seats. He can transform into a car and can be driven on the streets.

This car has a wing that can be folded automatically by pressing a button. This process takes place within a short time, about 30 seconds.

Various features are also intended to reassure drivers stay safe on the streets. For example, by the presence of airbags to reduce collisions when the accident occurred.

With a variety of strengths in the technology sector, predictable price is quite high. Ie USD 200 thousand, or in the range of billions of dollars.

Transition has been successfully tested several times. Hopefully, this sophisticated cars can already be mass produced in 2012. Terrafuga Transition, The flying car. 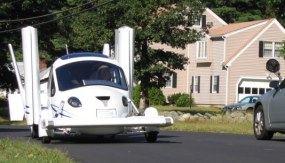 This entry was posted in Car and tagged Terrafuga Transition, The flying car, U.S. Department of Transportation. Bookmark the permalink.